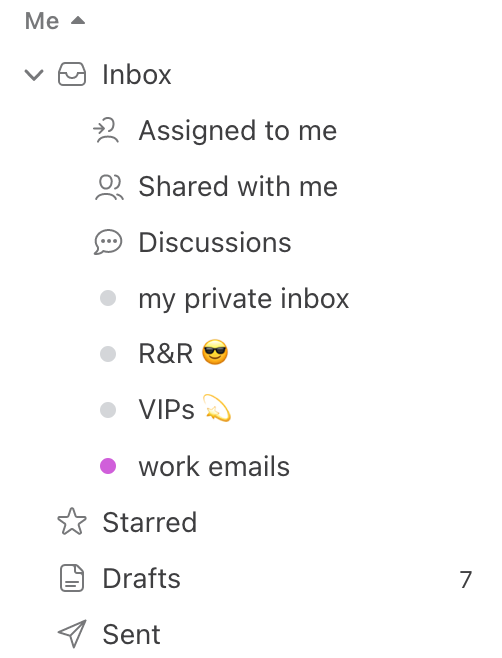 Being mentioned or invited to a conversation will add it to this section. If you send a reply, post a comment, or subscribe by clicking the bell icon, then all new messages and comments will cause the conversation to bump up in this section so you can see new activity. If you don't subscribe, then it will stay archived even when there's new activity. More information on Shared with me can be found here.

Any internal discussions that you've been invited to will be found here. New comment activity in the discussion will cause them to unarchive and bump up in this section until you unsubscribe from them.

You can star any conversation that you want to find later by clicking the tag icon on a conversation, then selecting the Star tag.

Your Drafts folder contains drafts that you created in Front, and does not sync with the drafts in your Gmail or Office 365 inbox that were created there or vice versa. Once you send the message, it will leave your Drafts folder and show in the inbox it was sent from.

Your Sent folder in Front will show messages you’ve sent personally from Front, rather than messages your teammates have sent. Deleted emails will no longer show up in your Sent folder, so we recommend you archive your emails instead and only delete messages that are truly not required, such as spam. Messages sent from third-party apps like Gmail, Outlook, and Salesforce won’t show up in this folder; though they will still be synced to the Archived tab of the inbox if the channel being used has a two-way sync in Front.

You can customize your sidebar by displaying the items you need, as well as curating the order of the inboxes and items. Learn how to do that here.