Sharing drafts in Front allows teammates to collaborate and get feedback on a message prior to sending. Instead of writing a draft on your own or needing to forward a copy of the draft for feedback, shared drafts enable you to edit a draft together and consolidate feedback in a clean, collaborative way. You can even use comments to have a discussion about the draft as you're collaborating.

Compose a new message or reply in an existing thread, then type up your draft. At this point, the draft is only visible to you.

You will see a gray banner above your draft explaining whether anyone will see your message after sending it, depending on what From channel you're composing with and whether participants are already in your conversation. 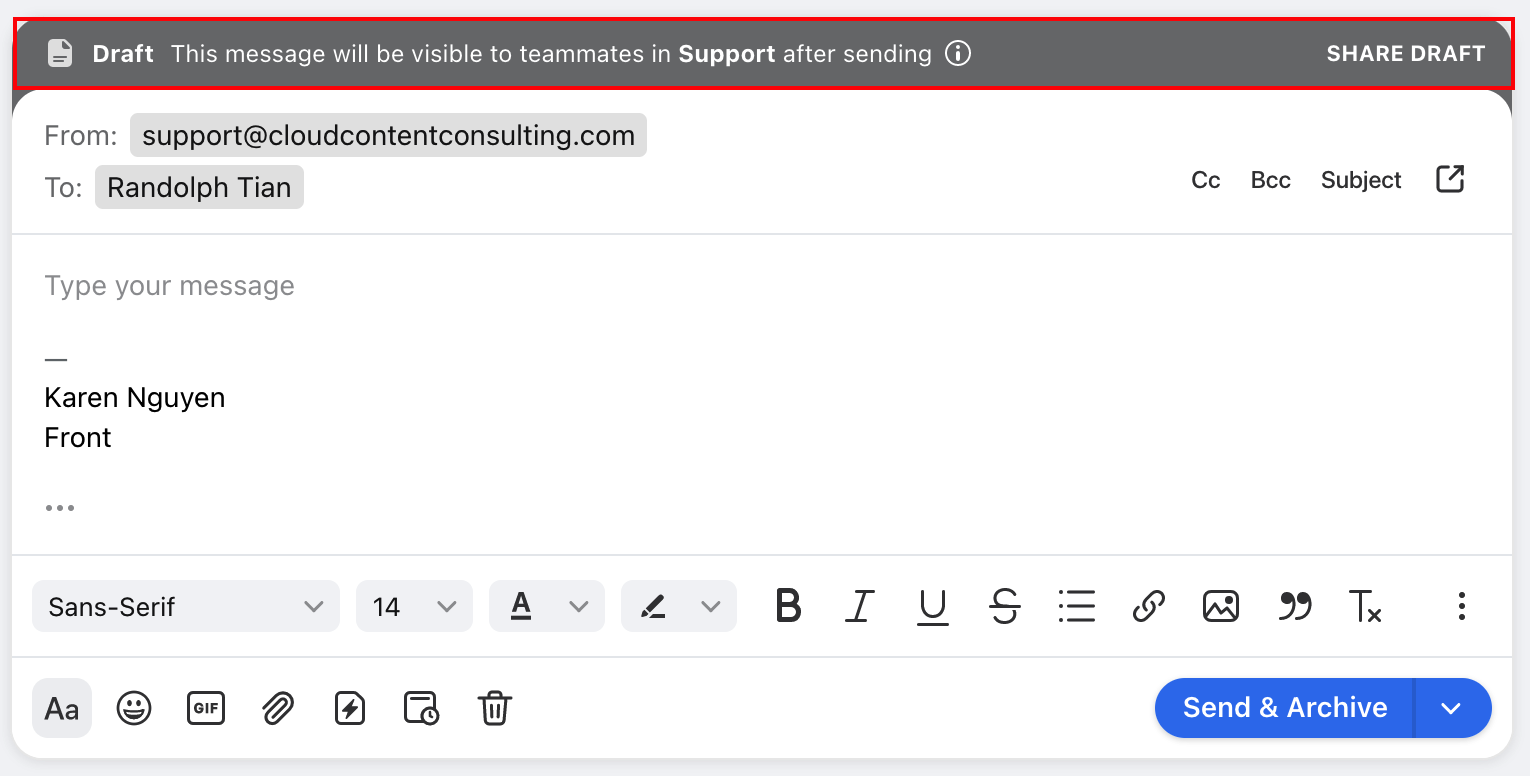 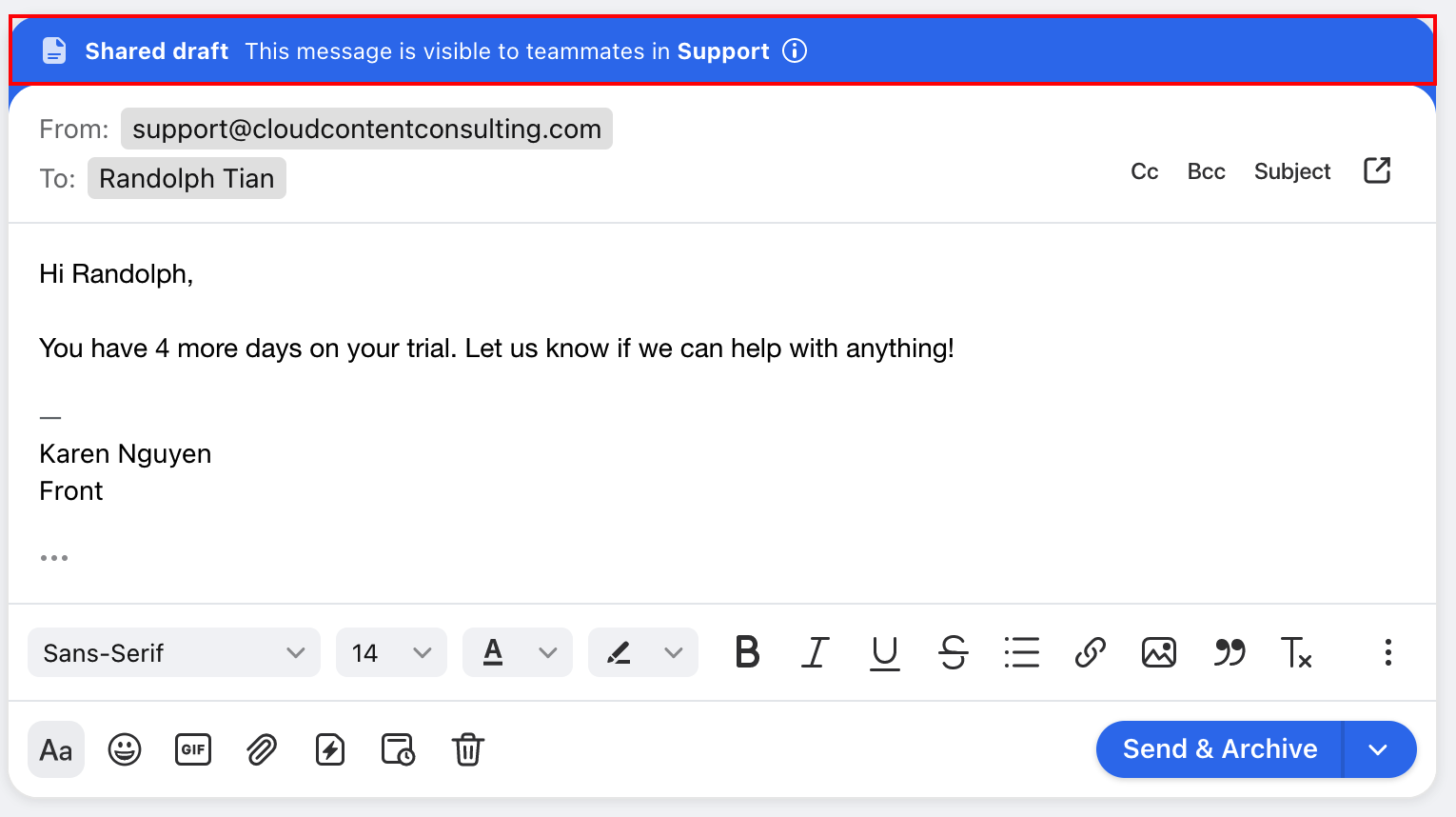 Once shared, you can also @mention a teammate in the conversation to direct their attention to the draft, which also makes them a participant. Any teammates with access to the inbox will be able to see the draft, even if you did not explicitly invite them or mention them for the draft.

How to edit the draft

When another teammate is editing a shared draft, the blue border will show who is editing and when they last made changes to the draft. 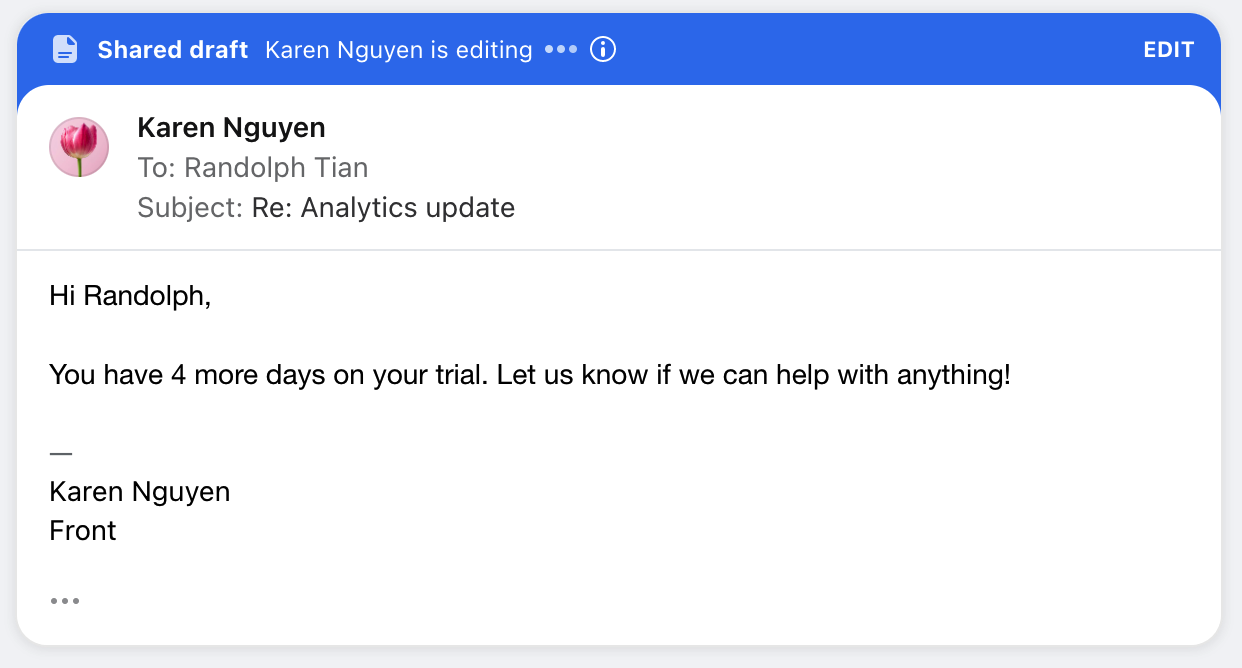 To take over the draft, click the Edit button at the top right of the blue shared draft bar. You will see a confirmation screen asking whether you want to proceed with editing the draft. Only one teammate can edit a draft at a time.

Make your edits to the draft, and your teammates will be able to see the edits in real-time on their screens as you're typing.

To pass the draft back, simply @mention your teammate and let them know you're done editing. They can then click Edit button on their screen and take the draft over.

Who can see the draft?

Once you share the draft, it is visible to anyone who has access to the inbox you are sending from. Additionally, whomever you explicitly invite to the draft or are already participants in the conversation will see the draft.

How do signatures work with drafts?

When working on a draft, the conversation automatically switches to the signature of the person who is currently editing the draft. This allows for another person to send an email to someone even if they did not originally compose the message.

Where are my drafts?

You will find both your personal drafts and any shared drafts in your Drafts folder, differentiated in your drafts list by the labels Draft or Shared draft. The Shared drafts will be any drafts that were specifically shared with you, rather than drafts shared within a general team inbox that all teammates with access are able to view.